Binary Ninja Debugger is a plugin that can debug executables on Windows, Linux, and macOS, and more!

The debugger plugin is shipped with Binary Ninja. It is open-source under an Apache License 2.0. Bug reports and pull requests are welcome! 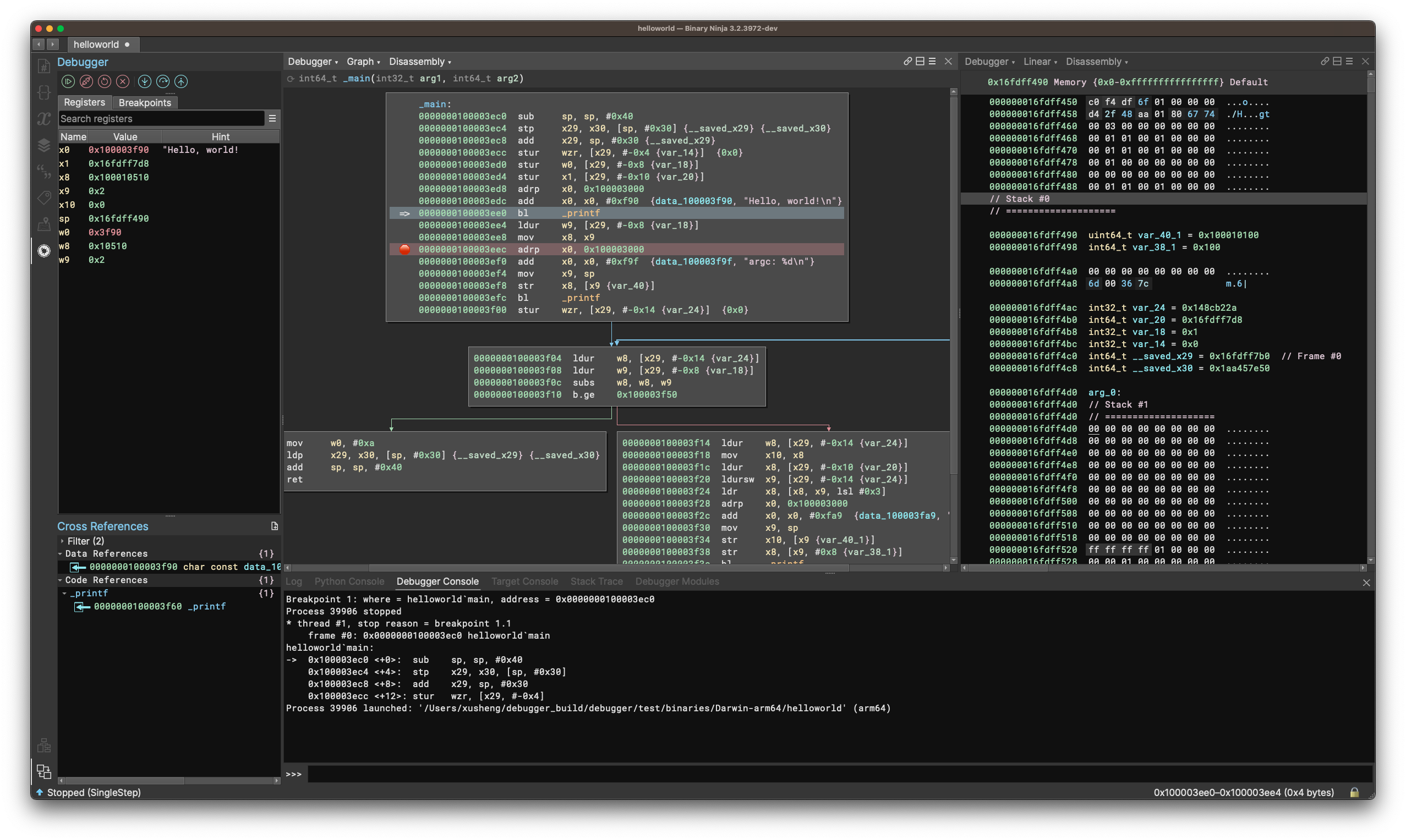 The debugger sidebar contains three widgets: the control buttons, the register widget, and the breakpoint widget.

There is a row of buttons at the top of the debugger sidebar. They control the execution of the target. The behavior of each button is hopefully intuitive from its icon. You can also hover over the button to see the name of the icon.

Buttons that do not work for the current target status are disabled. For example: before launching the target, the Step Into button is disabled.

A common scenario is to click the left-most button to launch the target and then use the buttons on the right to resume the target, step into/over/return. The Pause button can be used to break into the target while it is running.

For Step Into and Step Over, if the current view is viewing an IL function, then the operation appears to be performed on that IL, offering a source-code debugging-like experience. However, the underlying operation is still performed at the disassembly level because that is the only thing the backend understands. The high-level operations are simulated, i.e., the debugger may decide to step the target multiple times before finally yielding the control. These are transparent to the users.

Register widget lists registers and their values. A hint column presents anything interesting pointed to by the register. Currently, only strings and pointers to strings are considered. In the future, we would also annotate variables.

Double-clicking a value enters editing mode, and the user can type in new values for the register. The new value is parsed as hex.

An experimental feature is added to shorten the list: registers with a value of zero are not shown in the list. To disable it temporarily, right-click and unselect "Hide Unused Registers".

The breakpoint widget lists breakpoints in the target. There are two columns in it, the left one shows the address in the format of module + offset, and the right column shows the absolute address.

The context menu of the widget offers to delete a breakpoint or to jump to the address of a breakpoint.

There is a Debugger menu in the main window menu bar. 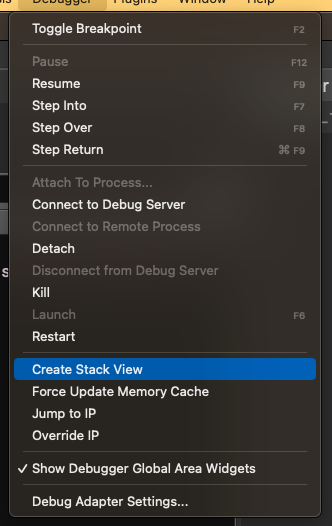 It contains duplicates of the debugger control operations available via icons and also shows the hotkeys bound to those actions. 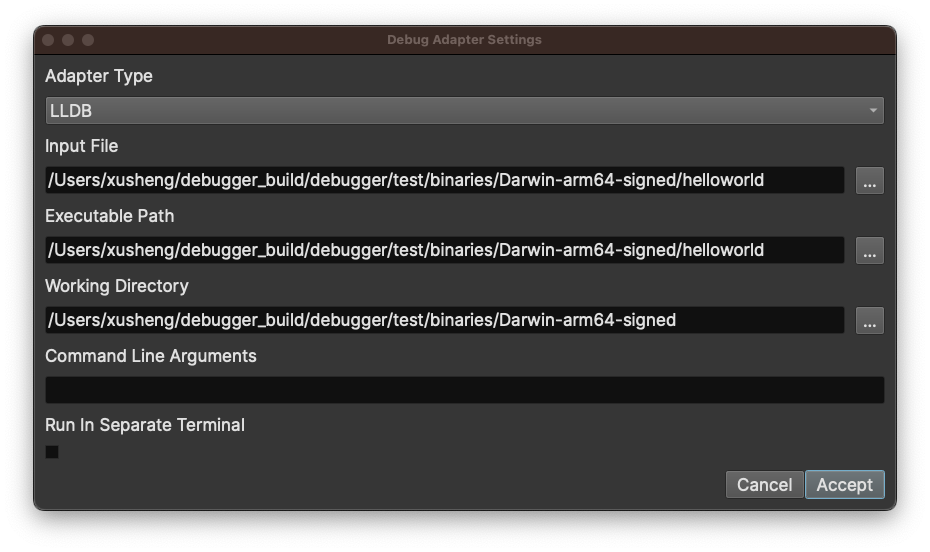 Within this dialog, you can select which DebugAdapter to use, as well as configure debugger settings such as command-line arguments or the working directory.

Run in Seperate Terminal will cause the target to run in its own terminal, and the debugger will not be able to monitor its stdout/stderr, or send input stdin. This is suitable when the target sends complex output, and the debugger's console emulator (which is quite basic now) cannot handle it.

The Target Console panel simulates a terminal for the target. If the process writes to stdout, the content will be printed here. There is an input box at the bottom, and anything entered into it will be sent to the target's stdin.

Due to a backend limitation, this feature only works on macOS and Linux. On Windows, the target always runs in its own external terminal and all input/output happens there.

On macOS and Linux, the default setting redirects the stdin/stdout here. However, if the user configures the target to run in its terminal (by calling dbg.request_terminal_emulator = True), then the stdin/stdout will not be redirected, and need to be accessed in the target's terminal.

The debugger console allows the user to execute backend commands and get the result.

On Linux and macOS, the backend is based on LLDB and the console accepts LLDB commands.

On Windows, the backend is based on Windows Debugger Engine, and it supports WinDbg command syntax. All WinDbg extension command, e.g., !peb are also supported.

The stack trace widget lists all the threads along with the stack frames of the active thread.

The dropdown menu is a thread selector, which can be used to switch between threads. The selected thread will become the active thread and its stack frames will be shown below.

Double-clicking an item in the stack frames list navigates to the return address of the frame.

The module widget shows the address, size, name, and path information of the target's modules.

Note: the bizarrely huge size is caused by dyld_shared_cache on macOS, which will be addressed in the future. The size of the main executable is still calculated correctly.

A debugger status widget is added to the main window's status bar. It indicates the current status of the target.

For example, when the target stops, it will include the reason for the stop. When the target exits, the exit code is reported. When an error occurs during certain operations, an error message will also be displayed here.

The widget shows the status of the debugger for the current binary view if a debugging session is active.

The debugger registers a series of useful actions along with keyboard shortcuts. These shortcuts can be customized using Binary Ninja's keybindings support.

Among these actions, target control actions, e.g., Run/Step Into have the same effect as the control buttons in the sidebar.

Toggle Breakpoint adds a breakpoint at the current location if there is no breakpoint; otherwise, the existing breakpoint is removed.

Run To Here lets the target execute until the current line is hit.

Make Code is an experimental feature that displays the selected region as code. If the region is indeed code, the user can use P to create a function there. 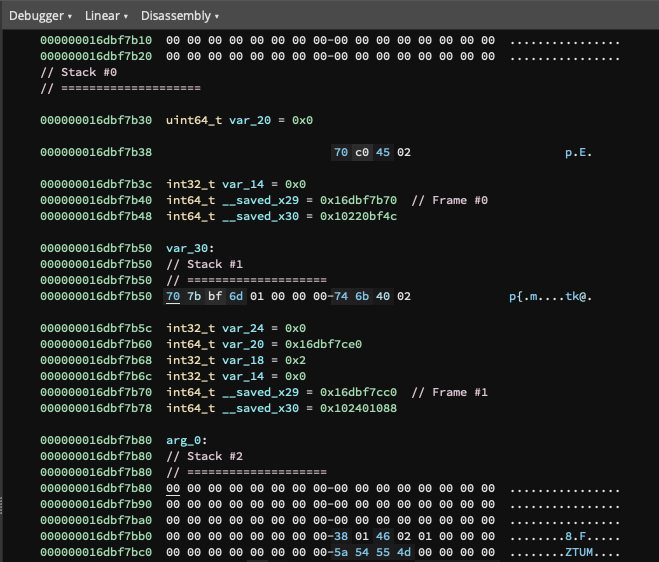 When the target breaks and a stack trace is available, the debugger annotates the stack variables in the linear view as data variables.

In the future, we will offer a way to set up this side-by-side view in one click.

Only the stack frames and variables of the current (active) thread are annotated to avoid confusion. If you wish to view stack variables from a different thread, first switch to that thread in the Stack Trace global area panel.

The annotation is done only when there are at least two frames in the stack trace. This is a known limitation, and we will address it later.

On every line that has a breakpoint, there are two visual indicators:

On the line where the program counter is at, there are two visual indicators:

The goal of the Binary Ninja debugger is to provide a unified way of debugging programs on different platforms (e.g., Windows, Linux, macOS, etc). However, this is not an easy task, because each platform has its own way of supporting debugging and it varies considerably.

To deal with this, we abstract the core functionalities of a debugger into a class DebugAdapter. Each debug adapter is a subclass of the DebugAdapter with the platform-dependent implementation of each method.

The debugger then drives the various adapters, creating a unified debugging experience, both in GUI and API.

New debug adapters can be created by subclassing DebugAdapter to support other targets.

Remote debugging is a planned feature. Specifically, the capacity to connect to a target via RSP protocol is already baked into the LLDBAdapter, though not tested.

To represent the memory space of the target, the debugger creates a specialized BinaryView called DebugProcessView. Throughout this document, it is also called the Debugger BinaryView.

The Debugger BinaryView reads and writes its memory from the connected DebugAdapter. To save on data transfer, the debugger caches all read operations from the adapter. Whenever the debugger executes instructions or writes data, the cached data is cleared.

When the target is launched, the debugger automatically switches the view to the Debugger BinaryView.

The debugger automatically applies all analysis data to the Debugger BinaryView, including functions and types, etc. This means the user can conveniently use types that are present in the static analysis.

The Debugger BinaryView can be accessed by dbg.live_view once the target is launched. You can read/write to it in the normal way. Writing to it will also cause the target's memory to change.

The debugger exposes its functionality in both the Python and C++ APIs. The Python documentation can be accessed online.

The API is centered around the DebuggerController class, which provides all functionalities of the debugger. There is no need to directly access the DebugAdapter classes.

When the debugger is used within the UI, the dbg magic variable is injected into the Python interpreter. It always represents the debugger for the currently active Binary View. You can think of it as being created by

where bv is another magic variable that always represents the current BinaryView.

You can simply run dbg.launch() in the Python console to launch the target.

Here is an incomplete guide on how to get started with the debugger, covering most of the basics on operations in the debugger.

Launch and Control the Target¶

There are several ways to launch the target:

There are some known issues and limitations with the current debugger.

Cannot debug binaries that require Administrator (Windows) or root (Linux/macOS). There are two ways to get around it: - On Windows, run Binary Ninja with Administrator privilege (not recommended). - Launch the process with necessary privilege, and connect to it using Binary Ninja debugger. See Remote Debugging Guide for more details. - Must be an admin or in the _developer group on macOS to debug.

According to https://lldb.llvm.org/, ARM and AArch64 support should be considered experimental. While in our experience it has worked fairly well, one particular bug we've observed is that single stepping over a return instruction will fail.

While we have tested the debugger in many scenarios, it may still malfunction in certain cases. Here are some basic steps to troubleshoot the situation. If you encounter a bug, please file an issue with reproduction steps, and if possible, attach the binary involved.

Vector 35 is grateful for the following open source packages that are used in Binary Ninja debugger: