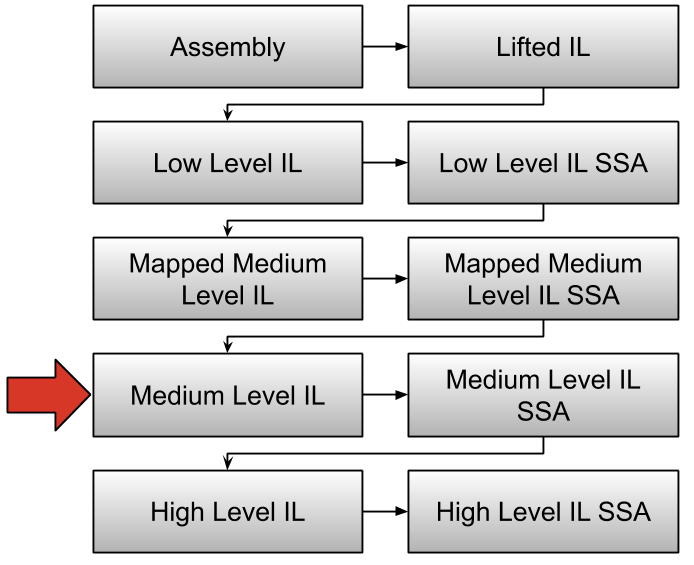 In the rest of this article we will explore the variable object, the type object, the confidence system, and finally the instruction set.

First, it's important to understand what we mean when we talk about a MLIL variable. Continuing from our example above we can get a Variable object.

Variables in MLIL have a very specific meaning, that is not completely obvious at first. They represent a single storage location within the scope of a single function. To those not well versed in program analysis, a storage location is where a value is located at a given point in time. In the process of compilation a compiler conducts a step called Register Allocation; this is the process of figuring out how to map the potentially infinite number of variables specified in the original source code to a finite set of registers. When there are more variables and intermediate values than registers available, the compiler spills them on to the stack. Thus a single high-level-language variable can be mapped across a number of storage locations. A variable can simultaneously be in multiple registers and on the stack at the same time. However, unlike high-level-language variables, MLIL variables represent one and only one storage location. Binary Ninja's High Level IL (HLIL) will be responsible for storing this mapping.

So let's look at the properties available on a Variable object.

The source_type represents the storage location type and can be one of the following :

Given the above information it might now be intuitive how variable names are constructed. First we determine the source_type of the variable. If it's a RegisterVariableSourceType we just use the register's name directly. If it’s a StackVariableSourceType then we use var_ + hex(-storage). Finally, we append a count each time that that storage location is reused.

The index is an identifier chosen to be unique across different analysis passes.

The type property returns the Type object associated with the variable:

Type objects are described in detail in the next section.

Type objects are very similar to standard C types. A Type object's type can be determined through the object’s type_class property. Valid types are in the TypeClass enumeration:

Type objects all contain a confidence property; this is currently only used for type inference, but can also be used by users implementing their own analyses. Below is a reference for each of the type objects and their unique properties.

An integer type has a sign, a width (in bytes), and a display type. The display type determines how the integer should be displayed; the options are self explanatory:

The wide character holds a unicode character constant whose interpretation can change depending on the analysis.unicode group of settings.

A varargs type is used to indicate that a function is variadic and thus represents the set of additional parameters being passed to a given function.

A value type is simply a constant value. It is used mainly in demangling for types which only have a have a name or value.

The function type describes the return type, parameter list, and calling convention of a function, among many other properties.

A pointer type simply describes a pointer and what it points to in the target/element_type property.

Array types function similarly to pointer types however the array type knows how large the object that it points to is:

Enumeration types function much the same way they do in C, providing a mapping between a name and corresponding constant. The object itself contains a members property and a list of EnumerationMember objects each containing a name and value.

Structure types are simple in principle but are complicated by the need for them to be referenced by a NamedTypeReference for them to be useful. Structures come in 3 different flavors: struct, class, and union. While the first two simply differ in name, in unions all members overlap. Structure objects contain a list of StructureMembers. StructureMember objects contain a name, offset, and type. Structures can be packed or aligned, accessible by the packed property.

NamedTypeReference types are symbolic references to other types. They function much like a C typedef (i.e. Name X corresponds to type Y). The NamedTypeReference has a type_class property describing what sort of type it is pointing at.

Most of the above should be self-explanatory except for the UnknownNamedTypeClass which is used in the name demangler, as the mangler doesn't disambiguate between named Enumerations and named Structures. NamedTypeReference objects also have a UUID type_id.

The instruction set is made up of MediumLevelILInstruction objects. Let's start exploring by using the python console to poke around at some instructions. Open up a binary in Binary Ninja and retrieve an MLIL instruction:

current_mlil is mapped to whatever function is currently being viewed and is not generally available to those writing plugins, as your plugin could be headless. The bracket operators tell the API to get the MLIL instruction at index 8 for the current function.

There are a number of properties that can be queried on the MediumLevelILInstruction object, and the validity of these properties changes depending on what the current operation is. If we look at the operation of inst we can see it is a MLIL_CALL instruction.

From the code in mediumlevelil.py we can see that the MLIL_CALL operation has three properties in addition to the operations available to all MediumLevelILInstruction objects

Thus we can query the call's output which is a list of variables:

The call's dest (destination expression) which in this case is a MLIL_CONST_PTR:

The parameter list can be accessed through the params property: